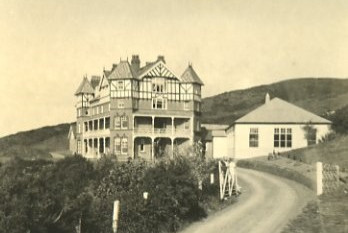 It all started in 1903 when local builder and landowner, Edward Morgan began building what was to be the Trefeddian Hotel.  One year on, this impressive building with chateau like towers and mock Tudor exterior opened its doors to its first paying guests, on 3rd February 1904.

Mary Jane Crewe (who was Tom Caves, great great great Aunt) managed the hotel until 1907 when John Morgan died, it was then that it came into the family when he left it to Mary.  And the rest, as they say, is history!

There have been several accounts written by the Cave family over the years about the Trefeddian, giving a fascinating insight into hotel life in the early years and sharing amusing anecdotes of life at the hotel which we will share with you.

Soon after the Second World War was declared, the family made the difficult decision to let the hotel to the English Finishing School, Châtelard.  The family moved into the Bungalow during this time.  Many of you will remember the Bungalow with great fondness, now the site of our two luxury self catering properties, Seascape.

It was during this time that the family unintentionally and embarrassingly fell foul to the law having broken the rules on rationing.  During an appearance at the Magistrates Court the family was let off with a caution, greatly comforted by the Magistrates who expressed the opinion that “the regulations of the day were harder to understand than a Chinese puzzle”!

After the war staff were difficult to recruit (much like post Covid times!) and many came over from Ireland to work every season.  Fond memories of the staff are told in the Hotel’s History book by various members of the Cave family,   In particular a Head Waiter who has several mentions was Joe King.   Who described himself as “Joe King by name – joking by nature”!  It is told that Joe tended to drink rather a lot and one day when having his hair cut fell asleep in the chair, he woke up with a horrendous perm, shocking everyone on his return to the hotel.

To accommodate the increased use of cars, improvements were made to the hotel garage.  The original building was demolished and the garage that you see today was built to replace it.  A petrol pump “was sited under the tamarisk tree overlooking the pitch and putt course where there is now a comfortable wooden seat.  How delightful to be able to manually fill the car up with petrol in such a lovely spot”!

What is now the Games Room was called the Badminton Room, with a full sized court, billiard and table tennis table.  During the season, table tennis and badminton tournaments were held for guests.  A badminton club met in the winter when the hotel was closed and dances were held for the locals.  Many people still remember the Games Room as a Badminton Room and fond tales regaled. 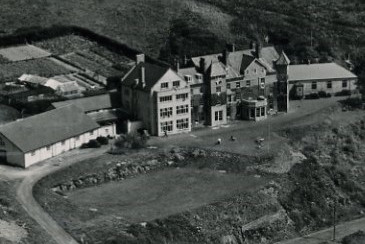 It was early 1950 when the putting green was laid, it originally being a croquet lawn.  With his love of golf and the skills that he learnt on a green keeping course this was the perfect project for John Cave who had taken over the running of the hotel by this time.

In 1959 the first real modernisation was made to the hotel kitchen.  Cooking had previously been done on an ancient Aga “and it rather depended on which way the wind was blowing to determine if it would work”!  The Aga was finally replaced with gas cookers much to the delight of Margaret Cave who cooked on the Chef’s day off. 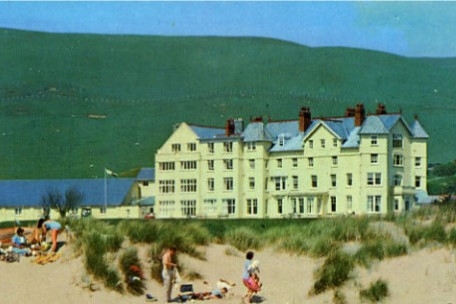 A defining decade described as upbeat and exciting, this was also the case for the Trefeddian when John and Margaret Cave made some colossal alterations and improvements to the hotel, the biggest since it opened in 1904.

In 1961 the front of the hotel was taken down and extended in order for every bedroom to have an en suite bathroom, replacing shared facilities and chamber pots.  Following this upgrade it became apparent that the hotel needed a lift, with just one porter “he had to climb all the stairs, sometimes right up to the third floor, with very heavy bags”.

Changes were also made to what was the Snooker Room, a room with “brown leather chairs and a small hatch through to the office where drinks were served”.  This was to become a proper bar, with part carpet and wooden flooring so guests could now engage in dancing, a great success in the summer months.

The face of the Trefeddian changed due to these improvements, it lost its original towers and Tudor exterior and became somewhat ugly, very typical of sixties architecture.

Big excitement enveloped the hotel one evening when John Lennon and Yoko Ono turned up at the hotel looking for accommodation.  Unfortunately there were no rooms available, which they could not believe.  They sat in one of the lounges for a while before they left and the staff took it in turns to look after them.  They eventually found a room at the Corbett Arms Hotel in Tywyn.  Local legend says that we were too snobby to accommodate them!

After a big win on the Pools, John Cave wisely spent his winnings on building the hotel swimming pool, a huge asset to the hotel.  You would see John and Margaret go down to the swimming pool religiously every morning at 6.30am until their later years.

It was soon after this that his son, Peter Cave started working at the hotel, working in various departments and learning the ropes.  He took over the management in 1982 when John Cave retired.  He never really retired completely though and continued to spend several hours at his desk every day dealing with the hotel accounts, whilst trying not to look out of the window to see what was happening on the golf course!

Together with his wife, Caroline, whom he married in 1987, Peter made major renovations and improvements to the hotel.

The Dining Room was extended, alongside the office and bar.  Modernisation was also made to the foyer and card room and the hotel opened for Christmas for the first time.

In 1999 the hotel came into the 21st Century when the first computer system was installed, enabling guest records and accounts to be digitalised, saving the office staff hours of work.

The biggest project in the hotels history brought in the millennium when a multimillion pound extension was made to the hotel and a fourth floor added.  Eight superior rooms span the floor, two with balconies and all with large seating areas and bathrooms.   A large gallery area with balcony is the perfect place to relax when you stay with us.  To accommodate the extra guests the hotel carpark was made larger by blasting the old quarry.

In 2004 the Trefeddian celebrated its Centenary Year.  On 3rd February 2004, exactly 100 years after the hotel first opened its doors an open day was held, followed by a firework display from the golf course and a gala dinner.  The staff were kindly gifted with commemorative two pound coins to remember the occasion.

This era was tinged with sadness alongside celebration, with the loss of longstanding members of staff Heather Horsley-Jones, Patricia Lloyd and our Hall Porter who was just 21, Craig Williams.

After battling a long illness, Peter Cave sadly died in 2012, it was then that his wife, Caroline was appointed Hotel Director.  Soon after this John and Margaret Cave died, a massive loss to us all.

Caroline has continued to follow Peter’s legacy and has continuously strived to make improvements to the hotel year on year.

Extensive renovations have been made to all the ground floor rooms with modernisation and improvements made throughout.   In 2014 major developments were made to the swimming pool, with a complete revamp and the addition of the spa bath and waterfall.   Wi-Fi was installed throughout the hotel bringing us into the modern world and Caroline’s biggest project to date was the demolition of the hotels self catering Bungalow.  Built in the 1930’s the building was beyond repair with regular water features appearing when it rained!  This was a huge undertaking which took nearly two years and saw the construction of our two luxury self catering properties, Seascape I and II.

Today, Caroline working alongside her son Tom, carry on the ethos of the Trefeddian. Together they strive to ensure that guests enjoy their holidays with us for many years to come.